History of the Carlsbad Plaza hotel

The historical part of today's Carlsbad Plaza Medical Spa & Wellness Hotel 5* Superior consists of four interconnected buildings whose historical names were Rudolfshof, Quirinal, Neapol and Moskau. Their origins date back to the late 19th century. Except for the Quirinal, all these buildings served as spa residences.

After 1945, all spa residences were confiscated by the Czechoslovak state, but they were still used for the same purposes. In 1982 the spas were officially included among the cultural monuments of the city and after 1992 they were interconnected and became the Sanatorium Florencie. Like all other spa residences in Karlovy Vary, the Sanatorium Florencie was modernized, but soon there was not enough guests or state funding to pay reconstruction works and the sanatorium was closed.

Construction of the Carlsbad Plaza Hotel

Even the most exciting projects started with a mere thought. Just like the construction of the 5* Hotel Carlsbad Plaza, which according to the original plan, was to be named hotel Ellen, was just a thought in the beginning. The idea was to create something unique in Karlovy Vary, which was not yet existent and has so far been missing.

The company Eden Group a.s. started extensive reconstruction to save this historic jewel in 2003. After two years of demanding work, the Carlsbad Plaza Hotel was opened in December 2005 and the historic residence rose from the debris in style.

The hotel interior is very cosmopolitan. To make every guest feel at home, all the components for the hotel have been selected carefully. Ingenuity is evident in every part of the hotel with which everything has been thought out to the last detail. Perhaps many may be surprised by the list of countries that have contributed to the Carlsbad Plaza Hotel, other than from the Czech Republic you may also find segments from the UK, Spain, Italy, Austria, Germany, Switzerland, China, Indonesia, Java and many others.

The present of the Carlsbad Plaza

The Carlsbad Plaza Medical Spa & Wellness 5* Superior Hotel was solemnly opened in December 2005. The hotel is situated in a quiet ambiance of the spa area of Karlovy Vary, close to the world-famous curative thermal mineral springs and picturesque historic colonnades.

In April 2007, the Carlsbad Plaza Hotel became a proud member of the most prestigious hotel alliance, "The Leading Hotels of the World", which since 1928 has brought together only the most luxurious hotels from all over the world. In the same year, a separate luxury medical and wellness center, the Carlsbad Clinic, was opened, whose services are tailored to a demanding clientele.

In 2009, the Carlsbad Plaza Hotel asked for a membership in the Les Clefs d'Or Association, which has been affiliating the best hotel concierges from 37 countries since 1929. After meeting all the challenging conditions it became the only hotel in Karlovy Vary, another distinguished member of this prestigious international association, in October 2010.

In 2011, the Carlsbad Plaza hotel was awarded the highest possible European certification of "5* Superior", thanks to which the hotel again confirmed that with its exceptional quality and high level it is rightly among the world's top hotels.

In April 2014, the new Spa Suites were opened to offer their guests a completely new and unique concept of treatment in maximum privacy while taking their individual needs into account.

Uniquenesses of the Carlsbad Plaza Hotel: 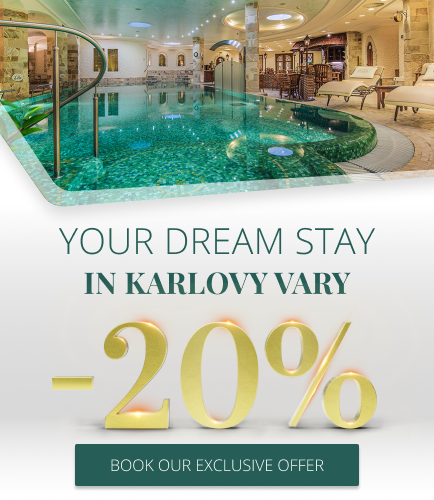